The great wildebeest migration is regarded as the greatest wildlife show on earth. Every year over 1.5 million wildebeests, 300,000 Thomson’s gazelle, 250,000 zebra and 15,000 eland trek from the Serengeti plains in Tanzania through the Masai Mara National Reserve in search of water and pasture.

Predators such as lions, hyenas, jackals and vultures closely follow the trek. Among the highlights of the spectacle is when the ungulates have to cross the crocodile infested Mara River – the only decent permanent water in the eco-system. 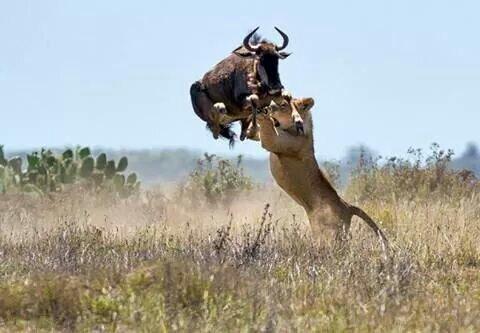 In the Masai Mara the wildebeests will be faced by the largest densities of African lions in the world. Here they will be hunted, stalked, and run down making for very dramatic photo opportunities.

The great wildebeest migration is entirely driven by grazing, standing water and rainfall patterns and it is therefore quite hard to predict the precise timing.

The month by month pattern below can only serve as a rough guide. For up-to-date information and to book a migration tour click here to skip down to the inquiry form. 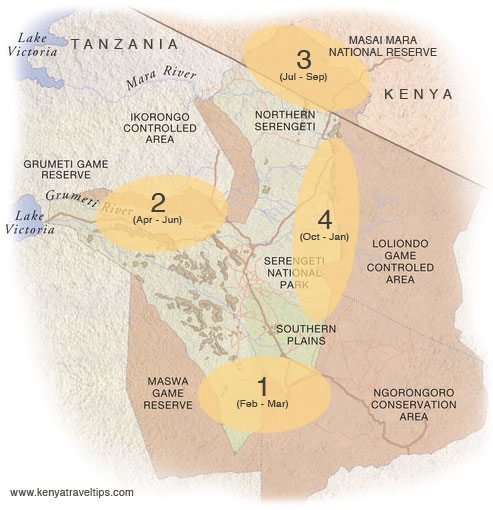 The great wildebeest migration has no beginning or end, it is an endless cycle of life. The animals migrate clockwise around the Serengeti – Mara ecosystem and cover a distance of 2,896 kilometers (1,800 miles).

January – February: The wildebeests give birth to some 300,000 to 400,000 calves born within 2 – 3 week period, eight and a half months after the mating season. The birthing occurs on the short-grass plains over the lower northern slopes of the Ngorongoro Crater highlands and scattered around Olduvai Gorge.

The birthing period provides a feast for the ravenous predators – lions, cheetahs, leopards, hyenas and wild dogs. It may seem that the gnus, as the wildebeest are also known are doing the predators a favor by giving birth to their young all at the same time, but in fact a surfeit of gnu veal in a very short period results in the predators’ becoming satiated and unable to consume as much as they would if the birthing period happened over a longer time span.

Watching the wildebeest birthing is amazing. As though intrinsically aware of the lurking danger, a newborn gnu gains co-ordination faster than any other ungulate. It is usually on its feet after 2 – 3 minutes, can run with the herd after 5 minutes and can outrun a lioness soon thereafter.

March – April: Towards the beginning of the long-rains and the end of the short dry season — around March, the short-grass plains of the southernmost Serengeti start to dry out and the wildebeest begin (or continue) their journey, heading towards the western woodlands.

May – June: As the rains set in, the wildebeests head north-west into the woodlands of Seronera towards Lake Victoria. This is when the annual rut happens, as the herds consolidate on the Serengeti’s Western Corridor. During the rut 500,000 cows mate in less than a four week period.

July – August: At this time the great wildebeest migration heads north into the Masai Mara National Reserve. On their trek the herd’s path is cut several times by rivers: in the Northern Serengeti by the Mbalangeti and the Grumeti, and in Kenya by the Mara River. While the river crossing at Grumeti River always represent an annual feast for the large crocodiles. This isn’t usually quite as spectacular as the crossing of the Mara River. 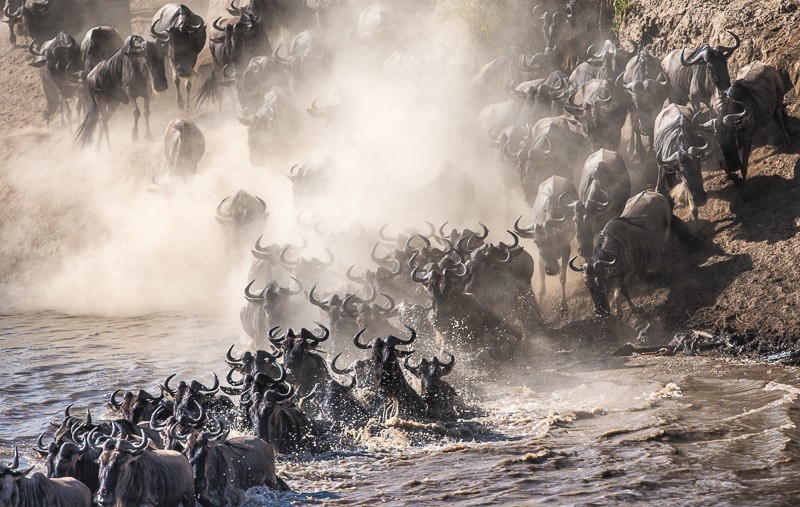 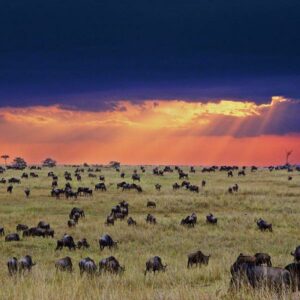 In the Mara the animals are faced by ravenous predators including the largest densities of lions anywhere. Here the animals are hunted, stalked, and run down making for dramatic imagery – unbridled nature in full tooth and claw.

The wildebeests spend several months in the Maasai Mara and by late October start heading south.

November – December: The herds trek down through western Loliondo and the Serengeti’s Lobo area, many cows heavy with the new season’s young.

They tightly group as they pass through the wooded country and spread out once they reach the open plains, completing the great migration circle.